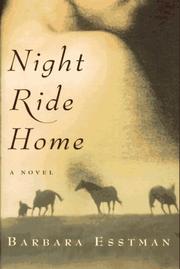  Youthful passions still burn strong as Esstman (The Other Anna, not reviewed), in a second novel that tries hard to tug the heartstrings but only occasionally succeeds, profiles a woman who finds the courage to reclaim her life after losing her son. Set on a farm on the banks of the Missouri River shortly after WW II, the story limns in self-consciously lyrical prose a woman's belated discovery, in the aftermath of a tragedy, of unsuspected strengths and middle-aged passion, making this a sort of Bridges of Madison County with a happy ending. When 16-year-old Simon is thrown by his mother's favorite horse, Zad, and dies, the Mahler family, never very cohesive anyway, falls apart. Events before and after the tragedy are recalled and analyzed by family members, as well as by Ozzie Kline, the wrangler who has loved horses--and Nora--since he and she were both teenagers. Nora, who was especially close to her son Simon, breaks down completely; husband Neal has her hospitalized and subjected to electric shock treatment. He also shoots Zad, sends the remaining horses away, and tries to sell the farm, though it's been in Nora's family for 70 years. Ozzie, who'd been working on the farm, disappears after the accident but soon returns to help Nora, who refuses to give up the farm. While Nora slowly recovers, Neal, using daughter Clea as a pawn, continues his verbal abuse of Nora: Refusing to give her a divorce, he threatens to hospitalize her again. But Nora, with her mother's and Ozzie's help, finds the strength to stand up to him and choose the kind of life she loves--working with horses--and finally admit her enduring love for Ozzie. One of those reassuring it's never-too-late-to-live-and-love- stories that will resonate with aging boomers and 40-plus romantics. (First printing of 75,000; $75,000 ad/promo)