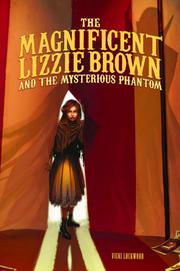 THE MAGNIFICENT LIZZIE BROWN AND THE MYSTERIOUS PHANTOM

This historical thriller set in Victorian London features a cast of likable circus people, a spunky heroine and a twisty mystery that will keep pages turning until the book’s finale.

Lizzie Brown, daughter of a thief and beggar, hasn’t had much kindness in her life since her mother died the year before. Determined not to become a beggar to support her brutal father, she escapes him during a beating, running blindly until she reaches Hyde Park, where she learns about a thief known as the Phantom and sees her first circus. Accepted by members of the Fitzy’s Traveling Circus, she becomes the assistant to the circus’s medium, Madame Aurora. And although she has always had dreams that seemed uncanny, at the circus, her clairvoyance steadily increases, becoming an important part of the story. At the heart of the novel lies the mystery of the Phantom and why he haunts Lizzy’s dreams. Surprises abound as this mystery works its way out.

Middle-grade readers will gobble up this delicious little novel, with its admirable protagonist and the fascinating crew of Fitzy’s Traveling Circus, who take her in.