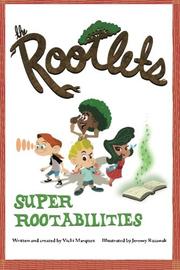 In this debut children’s book by a certified health coach, four young residents of an alien planet discover that they’re destined to develop nutrition-based superpowers.

In what’s clearly intended to be the first of a series of adventures, Marquez introduces young readers to a “small and enchanted” plant-based world and its inhabitants. The Rootlet kids—Brocc, Carrotina, Kaley, and Cornelius—were “just tiny little sprouts” on Planet Planted when they were plucked from the ground by wise Yammy Grammy and her eccentric friend Mr. Fungo Fungi, the owner of the popular Plantasyland amusement park. The adventuresome Rootlets and their dog, Basil, prepare to celebrate Earthrise, a “once-in-a-lifetime chance to see Planet Earth” through Brocc’s “Onion SkySearcher XT8 telescope.” Just before the big event, the Rootlets are surprised to learn that Earth’s appearance is the harbinger of their individual “super magical powers,” or “Rootabilities.” As the unsubtle (but not preachy) tale unfolds, the Rootlets try to imagine what powers they might have (“They started by reading up on all sorts of powers….But the spells wouldn’t cast, the broomsticks wouldn’t fly”). Carrotina is the first to discover hers: keen eyesight. Soon the other Rootlets learn what they can do: Kaley’s skin glows, Cornelius’ muscles are strong, and Brocc’s brain is powerful. Yammy cautions that their Rootabilities are just “newly sprouting” and that it will take time to learn how to use them—but they should always use them for good. Here, the author lightly models such concepts as friendship and teamwork. Overall, Marquez’s intent is obvious: to encourage kids to view healthy eating in a positive light. The book’s target audience will key into its health-conscious tone, and readers should find it easy to relate to the veggie-centric framework. Along the way, Russnak’s colorful, animation-style illustrations entertainingly realize the alien world. The ending promises further adventures to come.

A palatable mix of education and entertainment for kids.