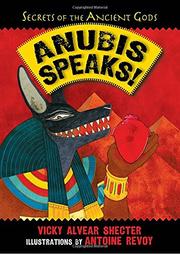 The jackal-headed god dares readers to come along on the sun god Ra’s nightly journey through Duat, the Egyptian afterworld, to rebirth.

Schecter (Cleopatra Rules!, 2010) properly notes at the outset that Egyptian beliefs were not monolithic, so her canine co-conspirator has chosen elements that convey the “gist.” The god himself steps up to promise with indecent relish that there will be “blood. And snakes. And decapitations. And monsters who like to gobble up hearts and squeeze heads until they pop.” Anubis begins by describing how Ra created the world and the major gods by (as he puts it) “hocking a giant lougie” but ultimately left Earth in disgust to take up residence in the heavens. He delivers an hour-by-hour travelogue of Ra’s passage through the “dark lands” and accounts of gory battles that repeatedly leave the evil giant snake Apophis chopped into sushi. Anubis goes on to deliver introductions to ancient Egyptian culture and myths, major pharaohs, mummification (with particular emphasis on the gross bits) and burial practices—since, as he perceptively points out, Ra’s voyage also served as symbol and metaphor for the human passage through life and the afterlife.

Staid, dispensable illustrations aside, an informative and unusually lively look at the Egyptian way of death.