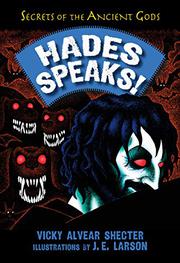 A tour of the ancient Greek (and Roman) underworld, squired by Hades and his lovely wife, Persephone.

Enthusiastically embracing his assigned role, Hades invites young visitors to pick an entrance to his shadowy realm (“There’s one right outside your bedroom.” Bwa ha ha) and to mind the monsters. The tour proceeds past Acheron and other rivers to the “fire pits of Tartaros” and the Fields of Asphodel and Elysium. Besides complaining continually that he gets no respect and fulminating about “brute-brat-boy” Herakles, the chatty chaperon delivers background on the origins of his mythological clan. He also introduces his fiendish staff and discourses on a range of need-to-know topics from Roman curse tablets to the mysterious significance of beans in ancient writings. Midway through, Persephone commandeers the narrative to tell some favorite myths—notably the one about how Theseus left part of his butt attached to the Hadean Chair of Forgetfulness. Hades ultimately leaves readers to find their own ways back to the land of the living with a generous bibliography as well as a glossary and a guide to the gods as mementos of their junket. Larson’s mannered, Aubrey Beardsley–style pen-and-ink scenes of angular figures shrouded in long cloaks or gowns add more chills than chuckles, but the map is helpful.

“I’ll see you on the other side,” Hades leers—“sooner or later.” At least the terra won’t be completely incognita.