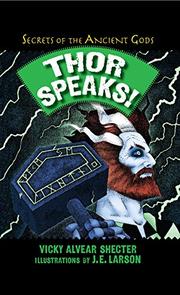 Mortals, do you dare follow the god of “strength and weather and mighty muscles” on a tour through Norse mythology?

Warning that “if you don’t like blood, you might want to close this book and read stories about pixies and fairies instead” (as if), the hammer-wielding guide begins with an introduction to the Vikings and their way of, literally, cutting out the middleman to get to the plunder. He then goes on to describe the creation of the giants from the “sweaty armpit” of Ymir and subsequent battles with “Odin’s team of good-guy gods.” He then conducts a tour up Yggdrasill with stopovers at Niflheim, Midgard, and Asgard, then concludes with a jolly preview of the slaughter of Ragnarök, the “end of times” (but not really). The itinerary also includes a quick visit to Valhalla—“an endless zombie slumber party” for warriors who die in battle—among other stops. Prefaced by a proper caution that Norse myths and legends are, like all such, subject to regional and other variations, the genial guide’s patter includes references to other prominent figures and tales. Larson’s dark, operatic tableaux of melodramatically posed figures clad in outsized headgear and geometrically patterned cloaks add a comically Wagnerian tone.

Showing uncommon foresight, Thor bids adieu with a “See ya next time, kid!” Return trips are definitely in the offing.