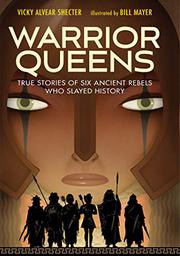 Short biographies of six ancient women rulers for a generation of readers accustomed to plucky heroines.

Thanks to the bridging colloquialisms among marginalized populations and the global vector that is the internet-driven media culture, the current language is enriched with a vocabulary of surviving—if not at times vanquishing—the interlocking systems of oppression, from “fierce” to “slay” and “not on my watch” to “arm up and kick butt.” Author Shecter employs the very same language here. Hatshepsut the pharaoh queen—whose pivotal reign beginning at age 15 or 16 was nearly buried by the misogyny of her own stepson, Thutmose III, and centuries of neglect—starts off the chronology of exploits. It goes on to cover the Persian-allied Greek queen Artemisia I’s military derring-do; the Nubian (now Sudan) queen Amanirenas’ martial and diplomatic prowess; and the Trung sisters’ joint rule of Vietnam, during which they initially drive out Han Dynasty–era China with an 80,000-person army. Britain’s Boudicca and Palmyra’s Zenobia round out the collection. These are all stories worth knowing. Unfortunately, the author bogs them down with the aforementioned slang in a seeming desire to appeal to her middle-grade readers: “So how did [Amanirenas] succeed in her mammoth smackdown?” Mayer’s busy, Greek vase–inspired illustrations don’t add to the stories nearly as much as the occasional photographs pertaining to each woman’s narrative.

History that tries way too hard to be hip.