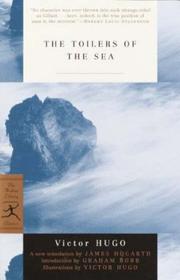 THE TOILERS OF THE SEA

Here to help celebrate the great Romantic writer’s bicentennial year is a lively new translation of the least known of his massive, unruly masterpieces. Though it lacks the concentrated melodramatic power of Les Misérables and The Hunchback of Notre Dame, this agreeably preposterous romance, originally published in 1866 in a carefully edited and partially censored text, displays most of Hugo’s enduring crowd-pleasing skills: a mastery of atmosphere (especially in the essay-like opening sequence, “The Channel Archipelago”), deep and credible empathy with working-class heroes and heroines, and a rare ability to create vivid and visceral action scenes (most notably evident in its hero’s climactic battle with the loathsome octopus known as the “pieuvre,” or devilfish). The central story, in which its protagonist Gilliatt accepts the task of freeing a grounded ship (for which service he will be awarded the hand of a wealthy shipowner’s daughter), is energetically juxtaposed against richly detailed pictures of seamen’s occupations and marine life that recall (though in no way rival) Melville’s definitive mixture of narrative and fact in Moby-Dick. And, although Toilers is unmistakably more romance than realistic novel, the bracing bitterness of its ironic conclusion gives it a haunting staying power.

Those of us who first “read” this novel in the Classic Comics version of half a century ago will be grateful to discover that Hugo’s impossibly grandiose and overblown yarn remains as perversely irresistible as ever.