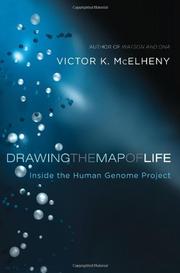 DRAWING THE MAP OF LIFE

Inside the Human Genome Project

A couple decades ago, the idea of the government supporting a project to map and sequence the whole human genome—locate where the genes are and specify the precise order of nucleotides that make up “the language of life”—was a gleam in the eye of a few stellar pioneers, but looked down upon by an equally stellar group of naysayers. With the advent of Big Biology in the ’90s, however, massive amounts of money poured into the National Institutes of Health, which, along with the Department of Energy and foundations abroad, supported international teams at multiple laboratories. Then came private competition in the form of American biologist and entrepreneur J. Craig Venter. McElheny devotes more than half the book to this narrative, which ends with the Clinton administration’s announcement of the completion of first drafts of the human genome by both Venter and the NIH’s Francis Collins in 2000. Throughout the book, the author provides well-developed profiles and anecdotes of the characters involved, but the real value is in McElheny’s enumeration of the astonishing complexities in human and other genomes revealed by today’s sophisticated technologies. Even the definition of a gene is no longer clear. There are split genes, noncoding sequences overlapping coded ones and much more, as well as lots of activity involving so-called junk DNA. Add epigenetics—the study of nongenetic factors that modify the action of genes—and scientists now have puzzles galore to inspire the next biological revolution.

Not the book for detailed explications of the technology underlying the findings, but readers will appreciate the implications of the new learning on evolution, agriculture, energy and prospects for “personalized medicine.”