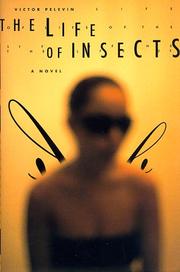 THE LIFE OF INSECTS

An ingenious and cryptic allegorical fantasy, obviously inspired by Karel apek's classic play The Insect Comedy, in which characters exist simultaneously as human beings and as various insects—by the prize-winning young Russian author of Omon Ra and The Yellow Arrow (both 1996). Pelevin's story consists of a number of linked episodes all set in the immediate environs of a seaside resort hotel where Samuel Sacker, a visiting American businessman, confers with his Russian associates-to-be Arthur and Arnold. However, all three are also mosquitoes, and the acquisitive Sam unwisely feasts on the blood of a sleeping lout who has ``imbibed Russian Forest cologne.'' We next observe father and son dung beetles pondering the mysteries of the universe (such as Egyptian spirituality); a woman (and fly) named Marina, who endures the struggle for material goods in a hivelike cooperative while endlessly digging her own burrow; an engineer, Seryozha, who transfers blueprints onto computer code (and, in his parallel life as a cicada, grows a mustache and is mistaken for a cockroach), and many other similarly compound figures whose fates are joined together in astonishingly inventive ways. For example, Nikita and Maxim, a painterdrug dealer and ``conceptual artist,'' share a joint while lamenting the fact that ``bugs'' are crawling into the ``weed'' they smoke only to find that they are bugs inside the joint offered by Sam Sacker to a sultry many-legged beauty named Natasha, who—we later discover—was hatched from one of the eggs laid by Marina, from whom she is estranged. Several other such connections are made in this hilariously transformed world where ``moths fly toward the light, flies fly toward shit, and they're all in total darkness.'' It's a powerfully disturbing metaphor for the economic deprivation and social chaos of post-Soviet Russia, and Pelevin develops it with haunting, mocking specificity and authority. A brilliant work from one of the best newer writers on the international scene.