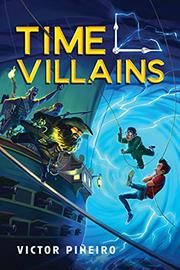 From the Time Villains series, volume 1

Historical guests come to dinner and chaos ensues in this uproarious debut.

Twelve-year-old Javier Santiago’s not doing so well at Finistere, his slightly cool, slightly weird semi-castle of a school in suburban Maryland. He’s at risk of failing sixth grade and falling behind his brainiac, history-obsessed best friend, Wiki. Then comes the annual all-school project: invite three guests, living or dead, to dinner, then write an essay. For a budding chef like Javi, that’s a piece of cake. Trouble arises when Javi uses his family’s magical antique dining room table to accidentally pull his guests into the present day, including the infamous Blackbeard, who escapes before he can be sent back in time. Blackbeard wants to use the table to summon his fearsome crew and enact his plans to take over the modern world. Worse yet, the dreadful pirate is hilariously popping up all over Finistere, working as the school groundskeeper to ensure the success of his sinister plans. With the help of Brady, Javi’s tough-as-nails younger sister, the boys work to take down Blackbeard while uncovering the school’s mysterious secrets. Featuring a diverse cast led by the Puerto Rican siblings and Haitian American Wiki, grand doses of humor, and an irreverent take on some of history’s well-known figures, Piñeiro's book scores with this tale of friendship, magic, and adventure. A breakneck pace and Javi’s colorful narration hold things together as the thrilling zaniness piles up.