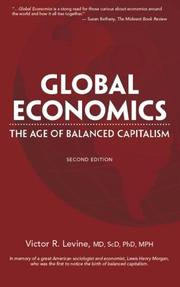 The Age of Balanced Capitalism

Levine, a medical doctor and Ph.D. who studies global trends in medicine and economics, explains how the destiny of capitalism means embracing what some mistakenly see as its mortal enemy: government regulation.

Capitalism and government need not be at odds, argues Levine. In stark contrast to proponents of laissez-faire economics, Levine contends the future of capitalism actually requires government intervention. He advocates “balanced capitalism”—a system in which a capitalistic economy is counterweighted with some socialistic legislation. “Such balancing leads to both the stability and prosperity of a society,” he writes. The role of government, in Levine’s view, should be that of an “arbiter” seeking equilibrium between the interests of business and labor. Balanced capitalism is the result of evolutionary process unfolding worldwide—and not just in democratic nations: At the moment, Levine says, it’s “working better for dictatorial China than for democratic America [mainly because] China is able to better regulate the balance between capital and labor.” In the most controversial of the book’s claims, Levine contends that China’s rise to the world’s second-largest economy offers lessons to the United States: “Government regulation is a part of [China’s] dictatorial regime, whereas over the last several decades America erroneously abandoned constant regulation of economics and embraced self-regulation.” The book’s straight-laced prose lacks vigor, but Levine skillfully articulates his views in basic terms, making his arguments graspable to those with just an undergraduate understanding of economics. Instead of supply-demand charts and statistical data, he relies on big-picture theories and historical perspective. The best chapters flow like well-polished précis, while the less substantive ones read more like CliffsNotes. In particular, students of economist Milton Friedman, the Nobel laureate, will find much to take issue with. Levine believes that embracing Friedman’s ideas of limited government involvement in free markets has resulted in dangerous levels of inequality and various other problems. Instead, Levine argues, America should return to the philosophy championed by Lewis Henry Morgan and John Maynard Keynes to restore widespread prosperity. Levine envisions a mutually accommodative approach, with Uncle Sam as a referee ensuring a level playing field for both Main Street and Wall Street.

A brief but refreshingly broad-minded take on global economics that is invigorated by the tension between capitalism and government.