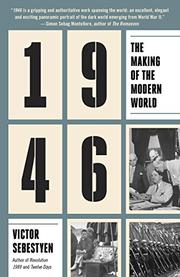 The Making of the Modern World

Newsweek associate editor Sebestyen (Revolution 1989: The Fall of the Soviet Empire, 2009, etc.) unravels the cataclysmic changes brought about by the end of World War II.

The author, a foreign correspondent whose family fled Communist Hungary, describes 1946 as “the year that laid the foundation of the modern world.” In the aftermath of the war, “vast populations had been forced to uproot in the biggest refugee crisis the world had ever seen. Hitler had dreamed of an ethnically pure Europe. Paradoxically, Germany’s defeat ensured that by the end of 1946 his dream was, to a great extent, a reality.” Coupled with the devastation in Europe, the postwar period witnessed the birth of Israel, the dissolution of the Indian subcontinent, the rises of America and the Soviet Union, the final stages of the civil war in China, and the democratic transition in Japan. Sebestyen is a witty storyteller with a wide-ranging intellect, and his fast-paced yet expansive style will appeal even to readers with little taste for history. Though very much a big-picture narrative, the book is liberally peppered with fascinating asides and anecdotes that humanize its subjects. Emperor Hirohito’s declaration that he was a human rather than a god was instrumental in moving the Japanese populace into the modern era, but less well known is the fact that it was “drafted by a mid-level officer of the American Occupation authority.” Iconoclastic at times, the author is not afraid to challenge conventional wisdom or topple sacred cows. Churchill, for instance, “was not entirely an innocent bystander, or even only a bit-part player [in the Yalta Accords]. He helped to build the Iron Curtain from Stettin to Trieste.” Ultimately, the lesson is that the vicissitudes of fate are unpredictable, and even the best-laid plans are quickly overtaken by reality.

An appealing introduction, aimed at a wide audience, to events that continue to shape global affairs.