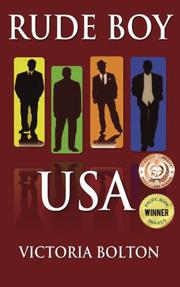 A debut tale of organized crime, political unrest, and love in New York City during the 1960s.

A sophisticated, four-man criminal fraternity, the Chimera Group, also known as “the Rude Boys,” has risen to prominence in Manhattan. One night, a man brutally assaults one of group’s members, John, and Celia Jones, who works at a local nightclub, saves his life. John soon falls in love with her, and she initially responds to his romantic overtures. However, their prospects seem doomed by the fact that he’s already in a loveless marriage. Celia eventually comes to work for the Rude Boys as their bookkeeper and begins a relationship with Ben, the group’s “number three man,” further complicating her relationship with John. She soon learns that the Chimera Group is hemorrhaging cash, due to another partner’s ungovernable drug habit. Meanwhile, the group contends with the unwanted attention of the Italian mob, which views the diverse group with racist disdain. Bolton aptly captures the tempestuous spirit of the time—a volatile brew of political radicalism, crime, racial tension, and sexual libertinism—and her painstaking historical research is evident on virtually every page. However, the prose is consistently plodding and the dialogue leaden, as when Celia aggressively flirts with John: “ ‘If you do dream of me, remember, I like it rough,’ she said as she sashayed to the door….John stood there and stared at her, feeling an intoxicating tactile euphoria in his whole body.” Other than the atmosphere of the decade, there’s little that binds together the meandering plot, which reads more like a successive series of random happenings than a coherent whole. One can’t help but wonder whether Bolton’s formidable command of the setting would have been better employed in a nonfiction work.

A scattershot story, but one that manages to deliver a historically edifying depiction of the 1960s.