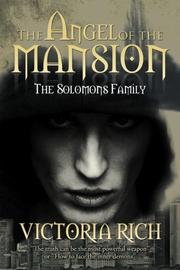 The Angel of the Mansion

Mediterranean-born, 18-year-old Anis accompanies her best friend to a modeling contest. There, Anis is noticed by the booking agency’s reps for having a look with “naturalness and genuineness,” and, in a lucrative arrangement, she begins working with them. In Manhattan, she meets Michael Solomon, a mysterious, obsessive, controlling man almost twice her age, at a fashion show. Not long afterward, she’s mysteriously attacked by an unknown man. As she recovers, Michael continues to pursue her, and he seems to exhibit a mystical power over her. He soon proposes marriage, and eventually she returns his affections. She discovers that he lives on a grand family estate, as he’s a descendant of the wealthy, powerful Solomon banking family. The couple’s marriage confronts the complications of business schedules as well as the awkwardness of befriending in-laws. Against a backdrop of international political unrest, Anis becomes acquainted with the house and its residents, but her loneliness deepens, and her habitual drinking and bizarre ghostly visions don’t help. Although her best friend, John, visits and offers solace, “the golden cage was beginning to lose its interest, and the role of the frosty queen had frozen me too,” she laments, and she despairs of the fact that she’s bound to Michael through a premarital agreement. Rich throws other elements into the moody mix: mystery women, including Michael’s obsessed ex-lover Grace; initiation rites; temples; magic spells; a mysterious brotherhood; and remote locales, such as Lake Como in Italy and Agio Oros in Greece. These aspects elevate the novel, as told from Anis’ first-person perspective, from a mere marital melodrama to an otherworldly, exquisitely detailed saga of mythical, spectral proportions. Although Anis eventually pleads for Michael to “take me out of this circus,” readers will be happy that they stand strong through it all. Overall, Rich has an impressive knack for literary pacing, and she also has the intuition not to overcomplicate her fiction with too many digressions. These qualities make it ideal for both YA and adult audiences who are eager for a sweeping, potent brew of danger and wizardry.

A thrilling gothic-romance novel that melds family secrets, magic, and marriage—with room for a sequel, of course.