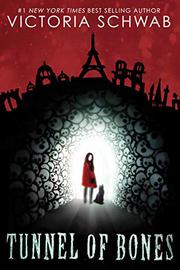 From the City of Ghosts series, volume 2

The sequel to City of Ghosts (2018) takes Cassidy Blake to Paris.

Cass and her parents travel from Edinburgh, a city of shadows, to the City of Light for the next episode of the paranormal TV show The Inspecters. First stop: Paris’ catacombs, where, five stories underground, the remains of more than 6 million people lie beneath the feet of the city’s 2 million living inhabitants. Here, in this tunnel of bones, the golden, glittering light of the metropolis above yields to an eerie dimness. Both Cass, who is a beacon for the dead, and her spectral best friend, Jacob, who continues acting as the voice of caution, immediately feel its psychic negativity. When Cass mistakenly frees a poltergeist from the catacombs, she and Jacob must race against the clock to stop it before it wreaks irrevocable havoc on all of Paris. From the the Tuileries to the Père Lachaise cemetery to the Paris Opera House, sense of place is tangible. Vivid descriptions of the catacombs highlight the morbidly fascinating nature of one of the world’s creepiest locations. Knowledge of the previous book isn’t strictly necessary, but readers will want to delve into Cass’ first adventure before embarking on this one. The open ending will leave readers wondering where Cassidy’s paranormal adventures will take her next. Assume whiteness except for Cassidy’s Scottish Indian friend, Lara Chowdhury, who offers guidance via text and video.

Another spine-tinglingly satisfying trek into the world of the dead.