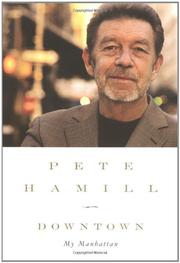 Manhattan south of 42nd Street (with a handful of excursions north), rendered in all its delirious human evidence by veteran newsman Hamill (Forever, 2002, etc.).

“New York,” Hamill writes, “is a city of daily irritations, occasional horrors, hourly tests of will and even courage, and huge dollops of pure beauty.” For this native son, it is also “infused with a mixture of memory, myth, lore, and history, bound together in an erratic, subjective way” by a man who has lived within the mysterious mixture of those elements. Hamill’s delightful, informative, and elegantly shaded account starts with his mother, who took her children on excursions through Brooklyn and one day stopped while viewing the Manhattan skyline to say to her thunderstruck son, “You’ve seen it before . . . It’s Oz.” Our very own wizard then proceeds to take readers on a historically rich, memoir-laden walking tour of the area below Times Square, covering not just the architecture and anecdotes that grace each of the city’s parishes, but their emotions, from greed to explosive anger. The city’s continuous changes prompt what New Yorkers have come to recognize as their own special sense of nostalgia. “In some unplanned way,” Hamill finds, “part of the Battery is now a necropolis.” The current Trinity Church stands on the site of two previous houses of worship. The Commissioner’s Plan of 1811 imposed “rigid order on wildness” with a street grid but could not truly impose technique over topography; Broadway, with its “honking velocity”, simply ignores the grid as it angles southeast to northwest. Historian, geographer, and frequenter of emporia, Hamill revels in everything from the Jewish Rialto of Second Avenue to the once-vibrant newspaper district of Park Row. Most of all, he hails a citizenry that refused to be lectured about sin and knew from the beginning that “the only way human beings could live together here was by practicing tolerance.”

A finely etched and hand-colored portrait from one of those rare reporters who has lived long and hard in his beat.

A KILLING FOR CHRIST
by Pete Hamill
Fiction