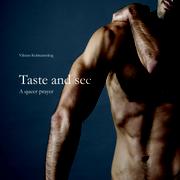 A gay man finds spiritual exaltation in the realm of the senses in this debut poem.

The narrator of this pilgrimage in verse starts out in the barren shallows of the hookup scene vetting potential partners on their most superficial iPhone traits: “Grindr sounds / Hi / Too thin / Send saved phrase / Sorry, you’re not quite my type / Grindr sounds / Hi / Too short / Sorry, you’re not quite my type.” Tiring of the daily Grindr, he repairs to a Christian retreat (despite his being a Hindu). Ensconced in a Spartan room with an icon, candle, rug, and no mirror to feed his narcissism, he embarks on a bout of contemplation fueled not by the artificial stimulation of screens but by unmediated encounters with raw sensations as simple as chewing a bread roll. (“Crisp outside, soft inside….One small seed / Stuck in my molar / Like a small animal / Hidden in its cave.”) He also comes upon the form of a young man who merges with the figure of Jesus in the poet’s imagination. The poet’s blossoming relationship with Jesus is imbued with devotion (“Can I love him with all my heart…And with all my mind?”) but is also frankly sexual—“I sense him here,” he writes after a masturbatory shower scene; “He will come to bed with me / If I want.” And whimsically romantic: “Come, let’s have breakfast, Jesus….Come, let’s eat a chocolate, Jesus.” Kolmannskog’s delicately erotic poem is drenched in Christian symbolism (“I take off my shirt / I dry his feet with it / I find some fragrant oil / I massage his feet”) but also partakes of earthier and more piquant imagery, likening the memory of love, for example, to a mosquito bite. Some readers may be taken aback by the embrace of Jesus as a personal boyfriend, but the physicality adds intensity to the poem’s soulfulness.

A lyrical study of passion, both religious and carnal.