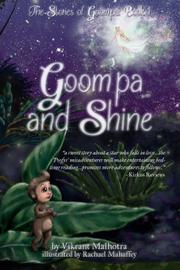 The Stories of Goom’pa, Book 1

Malhotra’s debut book for young readers offers a sweet story about a star who falls in love.
Like a traditional fairy tale, this book begins with a princess and her father, the king. The twist is that the princess, Shine, is a young star, and her father, Prime Ray, is a celestial being who rules the universe. Despite having everything she can possibly want, Shine is filled with loneliness. With the help of her magical guardian, Zydaar, she searches the cosmos for what she might be missing. Her gaze happens to fall on Earth and an enchanted forest where tiny elfin creatures called Poofys live; each has a distinct “poof” of hair on his head, sharp teeth and slight limbs. Protected by a fairy spell and watched over by an ancient being who’s taken the form of a jaguar, the Poofys have gone undetected by humans who live nearby. As a result, their world is an innocent paradise in which the most dangerous threat is a rain shower. One of the Poofys, Goom’pa, catches Shine’s eye, and she’s overcome by love. Illustrations would have greatly enhanced the text, as it may be difficult for readers to visualize the Poofys and the other characters. However, the Poofys’ misadventures will make entertaining bedtime reading for younger kids, who will be tickled by their silly names, such as D’uh and Sadsak. The cutesiness of their antics, as they spend their days searching for “munchies,” taking “nappies” and suffering “bonkies,” may soon wear thin for older readers, though. Although there are hints that the Poofys may encounter trouble if they stray from their community, this is a gentle story with no real conflict. Even when the stars confront power struggles in their celestial realm, which promises more excitement, the situations are generally nonthreatening and quickly resolved. Goom’pa and Shine are guaranteed a happily-ever-after ending, but it’s one that promises more adventures to follow.
A generally charming, if sometimes overly sweet, bedtime story for children.
Publisher: CreateSpace
Program: Kirkus Indie
Review Posted Online: Nov. 12th, 2014