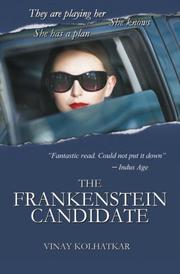 This political thriller set amid the presidential election of 2020 envisions an America further besieged by many of today’s issues.

In Kolhatkar’s debut, America of the near future must once again elect a president to wrangle the economic and political quagmires that threaten to wreck the country and the world. A colorful cadre of politicos runs the country or wants to: the incumbent Republican president with malignant cancer, the Democratic front-runner entrapped in an affair, a candidate nearly assassinated and a billionaire financier named Frank Stein who crusades for truth by railing against Washington insiders and Wall Street fat cats. As if the political climate isn’t unstable enough, the U.S. of 2020 faces a financial meltdown, increasingly antagonistic China and Iran, national protests that verge on riots and rising unemployment—sound familiar? There is hope, however, in Sen. Olivia Allen, a fighter of the good fight, who appears as an unlikely and reluctant candidate to challenge the power-hungry vice president, but only if she can overcome her imposter syndrome—she suffers an agonizing internal battle to justify her accomplishments. It’s an imposing backdrop for any novelist, let alone a first-timer—thankfully, Kolhatkar comprehends the practicalities of political strategy and economic theory, along with their dependent relationship, which he uses to inform his prose with thoughtful and matter-of-fact observations. But his tone is often too didactic; it compares, somewhat ironically, to media pundit characterization of Frank Stein as “too professorial.” Several sections intend to weave information about electoral processes and political history into the larger narrative, yet the inelegant entwining stumbles rather than flows. Coincidentally, the narrative, although set in 2020, is composed from a contemporary consciousness. Somewhat predictable economic and political prophecies have come true, while odd references to current media trends and popular culture icons—like Facebook and Rihanna—will tend to keep readers grounded in 2012. The narrative merely glances at the years between now and 2020, as if that time fills in only to establish the admittedly well-rendered, complex political climate of the future.

A valiant, earnest effort trumped by its unevenness.