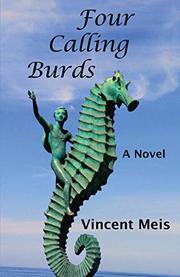 A family vacation in Mexico goes off the rails for four adult siblings in this literary novel from Meis (Deluge, 2016, etc.).

Following the death of their mother after a protracted illness, the four adult Burd children decide to take a vacation together in the Mexican resort town of Puerto Vallarta—the site of their parents’ honeymoon. “No spouses. No kids,” insists M, the oldest daughter. “Just the four of us together for the first time in ages. We deserve it. The last few months have been tough.” The trip gives the siblings a chance to discuss their various midlife crises—though what each says contains some surprises for the others. AJ, a mother of two, reveals that her marriage is threatened by her Trump-loving husband’s emerging bigotries. Lio is wracked with remorse for screwing up his marriage a decade ago, afraid he may never have the kind of relationship he’d like with his teenage daughter. Augie, a trivia-obsessed librarian, loves his husband and son, but he can’t help feeling tempted by a freer life in the middle of the famous “Mexican gay Mecca.” In the biggest shock of all, M, a child psychologist with a husband back home, reveals that she identifies as a man. When two of the siblings are kidnapped, however, the Burd family crises become significantly more pressing. Meis’ prose is lively and often funny, with the point of view bouncing back and forth among the four siblings. “Since my move to Modesto, Lio and I hadn’t gotten together as much as when we lived just a couple miles from each other in Oakland,” explains AJ. “If the kidnapping had a positive aspect, we had plenty of time to reminisce about our lives and talk about a future if there was to be one.” The setting and hostage situation breathe some fresh air into the familiar family-with-problems premise, and each of the four main characters is well drawn and engaging. The plot manages to be sincere yet lighthearted, resulting in a mostly rewarding reading experience with a few laughs along the way.

A clever story of midlife dysfunction set on a Mexican vacation gone awry.