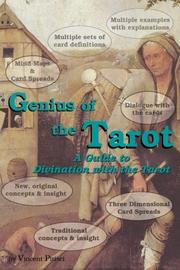 Genius of the Tarot

A thought-provoking guide to the Tarot with insights for pros and neophytes alike.

Pitisci’s debut takes an approach to the Tarot that’s as multitextured as the cards themselves. Part reference, part instruction, part entertainment, the book delivers a solid foundation on the cards and their basic spreads while also providing fresh perspectives. The bulk of the book consists of an encyclopedia of card meanings, and Pitisci combines pithy traditional interpretations with word associations that play off the images (he sees the Pony Express, for example, in the Knight of Swords). He also includes a quick-reference list of keywords for each card, with some uncommon but plausible reframings of the cards’ meanings (the Emperor as Builder, the Moon as Mysterious Paths). Pitisci’s card spreads are equally innovative, as he treats them as maps for exploration—layouts for prediction as well as self-discovery, planning and problem-solving. In one novel touch, he borrows from numerology to select a final, unifying card for the Four Winds spread, which looks at a person’s mental, physical, spiritual and emotional state. The traditional Celtic Cross spread gains new life through an alternative interpretation that uses the technique of mind-mapping, disconnecting the reading from a formal structure in order to encourage radically creative thinking. The easygoing, conversational tone puts concepts, techniques and suggestions within reach, and the author’s decades of experience help to demystify the Tarot. However, seasoned Tarot readers will also find much to ponder here, as Pitisci tilts the usual perspectives and unearths new meaning in well-traveled territory.

A worthy addition to any Tarot library, likely to teach new tricks to even the most experienced readers.