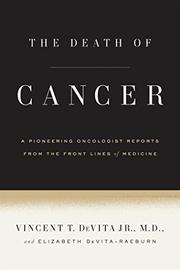 THE DEATH OF CANCER

After Fifty Years on the Front Lines of Medicine, a Pioneering Oncologist Reveals Why the War on Cancer Is Winnable—and How We Can Get There

One of the world's most renowned and forward-thinking oncologists recounts 35 years of cancer research and tells us why we should be optimistic about the future.

In the last 20 years, cancer survival rates have skyrocketed thanks to the innovative researchers and physicians pioneering effective therapies. Leading this “war on cancer” is DeVita (Medicine and Epidemiology and Public Health/Yale School of Medicine), whose career credentials include stints as director of the National Cancer Institute, president of the American Cancer Society, and director of the Yale Cancer Center. Even more impressive: he developed a cure for Hodgkin’s lymphoma, the first true cure for any form of cancer and the first of many successes to come in the field of combination chemotherapy. In each chapter, the author deftly navigates the many nuances of cancer research and treatment using accessible language to describe exciting technological advances while also providing a gritty look at the uneasy relationship between government and science. On one hand, writes DeVita, programs like the NCI exist because of federal funding, and many of America’s cancer centers are among the best in the world. However, the author also delivers a no-holds-barred analysis of bureaucracy’s weakness: it remains challenging to get new treatments approved, even in an era in which many cancer drugs show incredible promise. DeVita reports on this and myriad other issues facing cancer doctors and the patients they care for, imbuing his superb science writing with an emotional back story—including his own cancer diagnosis—that enriches the joys and struggles he has faced in his long career. This book is also far more than a history: it’s a manifesto in which the author states plainly what needs to be done to eradicate the disease. In the meantime, he arms readers with behind-the-scenes details about where to seek treatment, insisting that we’ve arrived at “the beginning of the end” of the disease.

One of the most absorbing and empowering science histories to hit the shelves in recent years.