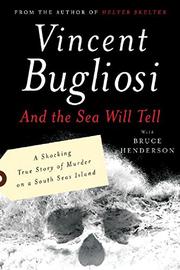 AND THE SEA WILL TELL

Best known as the D.A. who put Charles Manson behind bars, Bugliosi (Lullaby and Goodnight, with William Stadiem, 1987; Helter Skelter, 1974, etc.) stars in the unfamiliar role of defense attorney. While his lengthy narrative has full measures of courtroom drama, exotic settings, mystery, and suspense, he seems never to have unearthed a detail or subtlety he could resist sharing. As one result, his often riveting but frequently tedious tale lacks the focus that might have lifted it out of the true-crime genre. The story opens early in 1974 with a pair of twosomes sailing off, for very different reasons, to the mid-Pacific atoll of Palmyra Island. Mac Graham--a veteran San Diego-based yachtsman who had roved the seven seas with his wife, Muff, was in search of new adventures. By contrast, Jennifer Jenkins (a twentysomething hippie) was leaving Hawaii with Buck Walker, her jailbird lover who faced sentencing on new drug charges. The four met that summer while at anchor offshore the tropical Eden, which, for all its remote location, had attracted a small crowd of amateur mariners. Within a few weeks, however, other sojourners continued on their way, and the Grahams disappeared. Buck and Jennifer subsequently returned to Hawaii--in the Grahams' upscale boat. Interrogated by authorities (at the urging of the missing couple's friends), Buck and Jennifer were eventually convicted of theft. In 1981, bones identified as those of Muff Graham, along with a makeshift coffin, were discovered on a Palmyra beach, and the pair were indicted for murder. (Mac's remains have yet to surface.) Tried first, Buck was found guilty; but Jennifer's middle-class family retained Bugliosi, who gained her an acquittal in 1986. Much of the book is devoted to bow the author and his co-counsel (Leonard Weinglass) doggedly battled federal prosecutors and a hard-nosed judge to persuade a jury their client was innocent of homicide. Along the way, Bugliosi offers savvy, partisan commentary on subjects ranging from forensic medicine and the rules of evidence in court proceedings through criminal justice in theory and practice. Less convincing, though, are blow-by-blow reconstructions of the conversations, emotions, and thought processes of dead principals. The verdict: an advocate's exhaustive, intermittently rewarding account (already sold for a TV miniseries) of an intriguing, albeit less than consequential, case.