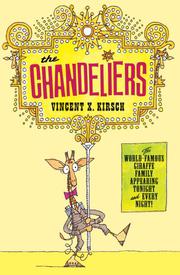 Kirsch applies his ornate flourishes to a troupe of giraffes in this tale of theatrical entrances and exits.

Each member of the world-renowned Chandelier family is featured in a pre–title-page cameo during which their extensive experience is highlighted—except for young Rufus. Not yet old enough to perform, he nevertheless proves his worth as the show unfolds. Ever the resourceful stagehand, he swings in on a trapeze to cue his father, camouflages himself with topiary to walk a parasol out to his mother, and brings up the rear in his brother’s horse costume. There are humorous visual details in the bustling watercolor-and-line compositions, and children will enjoy searching for the tiny mouse wearing a giraffe costume in every scene. Ultimately, however, the narrative loses steam. By the time Rufus is making thunder and lifting the moon, he and readers are just going through the motions to get to the end. The climax perpetuates the pattern: The busy hero casts a shadow monster and turns on the lights when they mysteriously dim, but the lack of actual drama, the static pace and the uneven writing yield waning interest.

Fans of the illustrator’s previous works (and theater) will forgive the flaws in favor of the electrifying compositions; those seeking true conflict or emotional connections should look elsewhere.