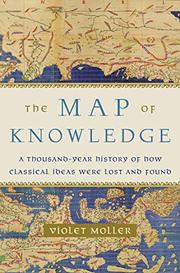 THE MAP OF KNOWLEDGE

How ideas survived in the ancient world.

When Moller (Oxford in Quotations, 2014, etc.) was a young historian in England, she wondered “what had happened to the books on mathematics, astronomy and medicine from the ancient world. How did they survive? Who recopied and translated them?” To provide some answers, the author meticulously and enthusiastically unwinds the “dense, tangled undergrowth of manuscript history” in seven cities. Each had the political stability that allowed scholarship to flourish and scholars, the “stars of the story,” to locate, translate, and transcribe rare works of literature and science. The first stop on her map of knowledge is the “intellectual heart of the ancient world,” Alexandria, home to a magnificent library and the city where Euclid wrote his Elements around 300 B.C.E. and Ptolemy his Almagest a few centuries later. Galen visited Alexandria but wrote his major works on medicine around 160 C.E. in Pergamon. By 500, Alexandria was floundering, and the fate of these texts written on papyrus was uncertain. In the ninth century, “knowledge flowed into Baghdad from every direction.” Scholars were busy translating manuscripts from Greek into Arabic using a new product, paper, while working in Baghdad’s many public libraries. Córdoba became the “new axis around which the world of scholarship revolved,” drawing scholars from far and wide. Moller enlivens her history with stories about young scholars who dedicated their lives to preserving these valuable texts, like Gerard of Cremona, whose Latin translation of the Almagest in Toledo was the “first to be widely disseminated in Europe.” In the eleventh century, Salerno was the “most advanced centre of medieval learning in the whole of Europe.” The author’s wonderful journey of discovery ends in Venice. In the 1350s, Petrarch studied Greek there to translate classical texts. By 1500, it was a major center of book publishing. The legacies of Euclid, Ptolemy, Galen, and others were now secure.

A dramatic story of how civilization was passed on and preserved.