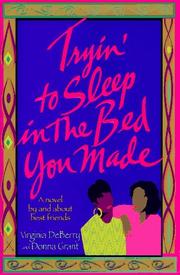 TRYIN' TO SLEEP IN THE BED YOU MADE

A sprawling, melodramatic debut ``by and about best friends'' that has enough plot twists and surprises for a season of soap operas. And, for all its attention to intraracial conflict and sexual politics, it eventually boils down to one affirmative, ``You go, girl.'' As their fortunes rise and fall in the world, the two unlikely best friends from the St. Albans section of Queens manage to take on the best qualities of each other. Patricia Reid is the hard case: An unwanted child of an alcoholic mother, she early on learns to be tough and self-sufficient. Gayle Saunders, on the other hand, is the pampered only child of a hard-working couple who eventually take in Patricia. While Gayle dreams of fancy clothes, a big house, and marriage to Marcus, a talented athlete, Pat concentrates on her school work, which earns her scholarships, first to boarding school, then to Princeton. She also discovers the black aristocracy on Martha's Vineyard and reinvents herself with a suitable pedigree. Marcus refuses to marry Gayle before he succeeds in major league baseball (which he eventually does), so she takes up with Ramsey Hilliard, a successful landscape contractor. As Gayle and her baby enjoy suburban living, Pat makes her mark on Mad Ave as a crackerjack ad producer. When the women seem to have grown hopelessly apart, tragedy reunites them. After Ramsey's gambling addiction bankrupts the Hilliards, Gayle and her daughter suffer one indignity after another, finally landing in a homeless shelter where Pat volunteers. Their tear-filled reunion, with Marcus now a celebrity athlete married to Pat, finds them both chastened: Pat has learned to temper her ambition with love, and Gayle has become practical and thoughtful. Driven by believable characters and no little sentiment, the two authors never lay on the molasses too thick. Not as literary as Gloria Naylor, this sisterhood-is-powerful first novel seems a natural for Oprah's Book Club. (Author tour)