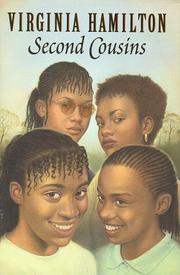 Affirming the value of existing family ties as she perceptively explores the formation of new ones, Hamilton elaborates on themes from Cousins (1990) with a populous sequel. As the Wright clan gathers for a rare family reunion, 12-year-old Cammy meets Jahnina, an oddly mercurial relative from New York City dubbed "Fractal" because she's seldom without her laptop computer. Unable to keep relationships straight, Cammy decides to think of all the young new arrivals as second cousins—until Jahnina calls Cammy's own father "Daddy" and turns the world upside down. Hamilton masterfully choreographs the dance of acquaintanceship, from tentative first exchanges, through tests and boundary-making, to discoveries of common ground; Cammy ultimately gets more help recovering from her shock from Jahnina than from either of her parents. In a grand, climactic reunion ceremony, presided over by Gram Tut Wright, all finally gather at the river where a cousin had drowned a year ago to lay flowers in the water, and to formally tell their names and places in the family line. Along with the strong story line, readers will be absorbed both by the author's language (alternately slangy and poetic), and by the complex emotional and conversational textures.