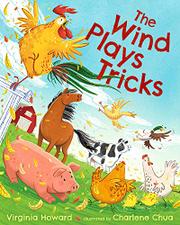 When a fierce wind descends on the barnyard, the animals hear some odd noises…and they’re coming from their own mouths.

The sudden wind unsettles all the animals on the farm just when they should be getting ready for sleep. Instead, they anxiously “cheep” and “cluck” and “oink” and “quack” and “moooo.” They shift nervously, pull together, and make all sorts of noises. All except Turtle, who tucks into his shell under an old log and sleeps. In the morning, though, the animals get a surprise. Pig says, “Cluck”; the Little Chicks say, “Neigh”; Horse crows, “Cock-a-doodle-doo.” How will they get their proper sounds back? Turtle has an idea, and he enjoys the process so much that he decides to open his mouth the next time the wind plays tricks at the farm: Perhaps he’ll catch a sound all his own. Chua’s cartoon barnyard is bright, and her animals, expressive, their faces and body language slightly anthropomorphized. The edges of the figures sometimes betray their digital origins. Though the tale is humorous and will give lots of opportunity for practicing animal sounds, the audience is hard to pin down, as the young children sure to enjoy mooing and clucking may not have the patience to sit through the somewhat lengthy text.

For patient listeners, a fun visit to a mixed-up barnyard.