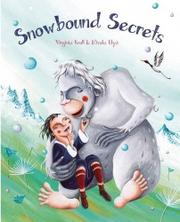 In Bhutan, a young girl and her pet yak, Karpo, set out with her father and brother on their first mountain journey to learn the secrets of trail trekking. When Pem slips and falls into a deep snowbank, a yeti rescues her. Even though the yeti can’t speak, he explains that Pem and Karpo are fine. How? “Back and forth they transferred questions, answers and feelings while Karpo chewed the mound of hay that the yeti had provided.” Through this absurd contrivance, the two discuss interspecies misconceptions: Humans tell one another scary stories about yetis; yetis must hide from hunters. Pem meets the yeti’s mate and their twins, who show her a cave drawing of a human with a gun. Pem adds a picture of herself and the little yak before the male yeti “eye-promise[s]” her that he will reunite her with her family the next day. A two-page author’s note about Bhutan explains that the country’s belief in yetis is so strong that stamps have been issued claiming it is the only yeti sanctuary in the world. The blue-dominant illustrations are awkwardly composed; Uyá’s stylized faces often looked distorted, even grotesque.

Though there is hardly an overabundance of picture books about cryptids, this is still one to skip.