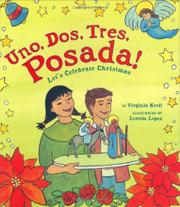 The Hispanic tradition of the posada (a party and procession) is the structure for this introduction to counting in Spanish and learning a few basic Spanish words about Christmas traditions. On the title page, two children and their father approach their Southwest-style home at dusk, carrying the piñata that appears on later pages. The children prepare decorations and treats for the posada, counting as they go from one to ten. The rhyming text uses the format of, “I say dos and you say two,” followed by a sentence that introduces one word or phrase in Spanish, and the basic Spanish words are easy to understand within the context. Simple but appealing illustrations in bright, citrus shades show each group of items (such as four pots of flowers or ten pieces of candy) along with a group of cheerful children enjoying the traditions. An author’s note explains them, defining the Spanish words within the explanations, but there is no guide to pronunciation. (Picture book. 4-8)