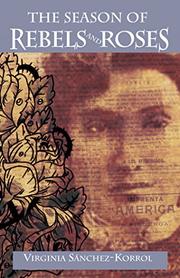 THE SEASON OF REBELS AND ROSES

Inocencia Martínez is just 18 when the story opens, while Lola Rodríguez de Tío, the book’s other protagonist, is a married woman with children, but the two white women know each other from Doña Lola’s women’s political group. The pair are soon separated as liberationists in Puerto Rico are hounded by the Spanish colonizers. The choppy pacing of the plodding plot follows Lola and her family’s move to Cuba to avoid persecution. Meanwhile, Inocencia, in love with the political revolutionary Sotero Figueroa, who is described using the questionable term “mulatto” (given without sufficient context for modern readers), goes against her family’s wishes in courting him. Eventually the pair marry and move to New York City. There, Inocencia establishes a women’s group to support the causes of Puerto Rican and Cuban independence. Though her group purports to have racial equality as a goal, the fact that the narrative exoticizes Sotero—both actually calling him exotic and fetishizing the darkness of his skin—undermines this aim. With such interesting material, it’s unfortunate that the uneven pace and often awkward phrasing don’t do the subject matter justice. While more books about Latin American history are overdue, the conflicting content and lack of an engaging narrative will satisfy only the most avid historians.