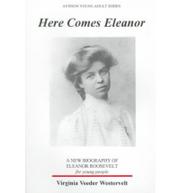 A New Biography of Eleanor Roosevelt for Young People

A serviceable biography of one of the US’s most extraordinary citizens, but not nearly in the class of Barbara Cooney’s Eleanor (1996) or Russell Freedman’s Eleanor: A Life of Discovery (1993). Westervelt has to sustain a breathless pace to fit the rich story of Eleanor Roosevelt’s life into these pages. She begins with the image of the golden-haired, painfully shy child, whose plainness was disdained by a beautiful mother, and whose adored, alcoholic father was mostly absent. She found refuge in study and in service to others from a very young age; when she married her cousin Franklin, she was given away by her uncle, President Theodore Roosevelt. That began decades of public life during which she supported her husband as he rose through public offices to the presidency, raised their children, fought off a domineering mother-in-law, and carved out her own life of tireless speaking, writing, and social action. Westervelt touches very lightly on the subject of Lucy Mercer and Eleanor’s possible liaisons, keeping the focus on the tremendous number of activities Eleanor undertook during WWII and beyond Franklin’s death. The lengthy biography unaccountably leaves off Doris Kearns Goodwin’s book; this is a useful biography, but not a magical one. (index) (Biography. 9-12)