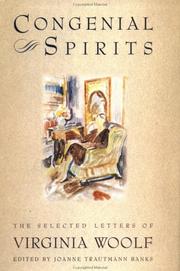 A curious selection of nearly 4,000 letters from the six-volume collection (The Letters of Virginia Woolf, Vol. I, 1888-1912, 1975) that Banks edited along with Nigel Nicolson (the son of Virginia Woolf's lover, Vita Sackville-West), whose familiarity with the Bloomsbury Circle accounts for the fascinating footnotes. But how does one account for publishing the letters at all when Woolf was so firmly opposed to it that her final words to her husband Leonard in her suicide note, and the final words in this volume, were to destroy her papers? And there is good reason for her reticence, for this selection portrays a trivial, mean-spirited gossip with no social conscience whatsoever. Intermingled with expressions of tenderness for her family, dying friends, female lovers, and her dog are brutal characterizations of major public figures in England such as Maynard Keynes, James Joyce, Beatrice and Sidney Webb, Freud, Henry James, G.B. Shaw, Gertrude Stein, and King Edward VIII. In sexually explicit and occasionally vulgar letters to her female lovers, she belittles male sexuality, especially homosexuality, and ridicules celebrated men of letters like Spender, Auden, Isherwood, E.M. Forster, and Rupert Brooke. Other letters reveal her petty but intense biases against Americans, Scandinavians, the poor, the provincial middle classes, the aristocracy, Jews (although she was married to one), politics, religion, academics, servants, and the reading public--this contempt and venom all contained in a volume called Congenial Spirits. The selection reveals little of Woolf's creative life or her work with the Hogarth Press, where she performed such technical and demanding tasks as typesetting her friend T.S. Eliot's The Wasteland And it reveals little of her periodic fits of madness--unless one considers her fierce judgments on her contemporaries, her obsessions with servants, sexuality, and decorative plumage, and her careful avoidance of a public world that was coming apart as symptoms of the derangement that ultimately led her to destroy herself. A fascinating though disturbing selection, more disturbing than the editor's superficial introductory essay on the significance of the letters would prepare one to believe.