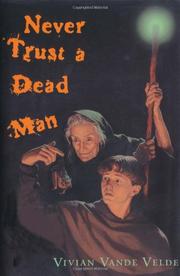 Murder, magic, salacious secrets, and sparkling wit immediately pull the reader into this engrossing medieval whodunit from Vande Velde (Ghost of a Hanged Man, 1998, etc.). Selwyn, 17, is condemned to death after his rival, Farold, is murdered in his sleep. Overwhelming circumstantial evidence convinces villagers of Selwyn’s guilt, so he is thrown into the burial cave to rot with the corpse. Although his fate seems grim, Selwyn is soon rescued by a hard-bargaining witch, Elswyth. She resurrects Farold’s spirit, frees them both from the cave, disguises them, and allows them one week to find the real murderer in exchange for years and years of Selwyn’s servitude. Hilarious mishaps ensue, as the bickering amateurs search out answers, exposing the villagers’ true colors along the way. The sympathetic hero, original humor, sharp dialogue, and surprising plot twists make this read universally appealing and difficult to put down. (Fiction. 12-14)