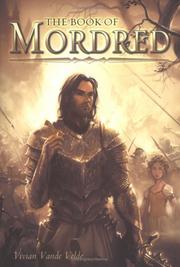 THE BOOK OF MORDRED

Sir Mordred of Camelot is seen through the eyes of three different women in this superbly written tale. First is the story of Alayna, whose five-year-old daughter Kiera is kidnapped because an evil wizard wants her magical power. Section two, a few years later, features Nimue, burdened by the rumor that she killed Merlin and plagued by her own obsessive over-thinking. The final section shows the tormented perspective of Kiera, now 14, as Camelot slowly falls apart, matching her early prescient visions of slaughter and doom. The three sections are distinct in voice and time, each building upon the last. Mordred, a key player throughout, is inscrutable and emotionally distant to the women but beloved nonetheless. He’s flawed, but not more than anyone else is, and his contribution to the downfall of King Arthur’s England is just one part of a tapestry. Vande Velde’s finely crafted diction never falters as the plot builds to its inevitable tragic end. (author’s note) (Fantasy. YA)