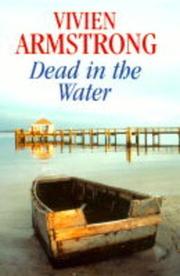 DEAD IN THE WATER

The worst thing about working as a dentist’s receptionist is that it just never ends. Even after Mimsie Crane discovers her boss, Edward Chambers, stripped and strapped to his own dental chair, his privates adorned with a bunch of daffodils and the walls festooned with anatomically descriptive graffiti, and he hastily offers her a month’s salary in lieu of notice on the condition that she keep mum about the affair, she still can’t shake off its fallout. Though the money buys her a five-week Mediterranean vacation, the cushion isn’t big enough to keep blustering Arif Khan from materializing on her return, wanting to know what’s become of Edward Chambers and threatening her if she doesn’t tell him. But Mimsie can’t tell him: Chambers has simply vanished, presumably drowned, according to his grim sister Phoebe; and Mimsie, thoroughly intimidated by Khan, is only too happy to elude him by taking an unlikely post safely outside London, courtesy of her frequent employer-of-last-resort, builder Steve Epps. Using Mimsie’s gift of gab and the nurse’s uniform Chambers had her buy, Steve insinuates her into the household of retired cruise-ship captain Toby Quinn, caught between grieving for his late wife and resisting his rapacious niece’s plans to consign him to a nursing home and grab his assets. The day that Mimsie finds Captain Quinn dead is also the day she learns Chambers’s ex-nurse Lynne Peters has been strangled. But don’t expect any closer connection between the two halves of this odd hodgepodge. Armstrong (The Wrong Road, p. 306, etc.) this time seems to be modeling herself on lesser Agatha Christie—They Came to Baghdad, say—with prose as cluttered as her plot.