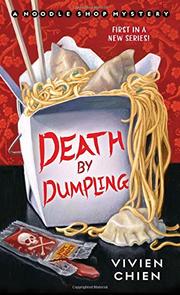 Can an amateur detective solve a case of poisoning by dumpling?

Lana Lee’s rough year is about to get worse. First she split up with her cheating boyfriend, then she quit her job. In order to keep paying her share of the rent for the place she shares with Megan Riley, she’s working for her parents as a hostess and waitress at Ho-Lee Noodle House in Fairview Park, Ohio. Half Taiwanese, half English, Lana’s grown up with many of the neighboring shopkeepers at Asia Village, an attractive shopping center owned by Thomas Feng and his trainee partner, Ian Sung. Arriving at Feng’s office to deliver his lunch, she’s almost run over by a furious Kimmy Tran, who’s just finished screaming at Mr. Feng. Later that day, Mr. Feng is found dead, possibly from an allergic reaction to shrimp, something he’s usually careful to avoid. Handsome Detective Adam Trudeau suspects that his death was no accident, and his prime suspect is noodle house chef Peter Huang. The new widow, Donna Feng, also seems to suspect Peter, though she says little and acts with quiet dignity. Tired of Lana’s moping around, Megan encourages her to investigate the death, even splurging for a book on how to become a detective. Lana’s mother, who only wants to see her happily married, is delighted that Lana finds Trudeau attractive and has been asked out by Ian Sung, who, backed by Mrs. Feng, plans to take over the operation of Asia Village. If Peter really is innocent, Lana must figure out who else switched the dumplings and removed Feng’s EpiPen. Her snooping uncovers many hidden secrets, but determining which one was enough to kill for proves both difficult and dangerous.

A charming debut with plenty of red herrings. The heroine’s future looks bright.

TREBLE AT THE JAM FEST
by Leslie Budewitz
Mystery

DYING FOR A TASTE
by Leslie Karst
Mystery

DOOM WITH A VIEW
by Kate Kingsbury
Mystery

DEATH ON THE MENU
by Lucy Burdette
Mystery