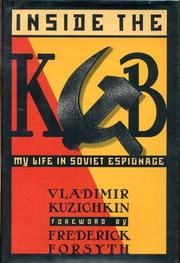 My Life in Soviet Espionage

A former KGB major's matter-of-fact reminiscences of service as an espionage agent in Iran. Born in Moscow two years after the end of WW II, Kuzichkin was drafted into the Red Army and eventually recruited by the KGB, given advanced training, and posted to Tehran in mid-1977. As a field operative, he worked with in-country illegals willing or forced to supply intelligence to the USSR. Despite diplomatic cover, Kuzichkin often crossed swords with SAVAK, the Shah's ruthless secret police, and later with the Ayatollah Khomeini's Revolutionary Guards. Nor was he as ease with colleagues or members of the Soviet community. For the most part, Kuzichkin found his expatriate comrades a venal and shiftless lot who evaded censure, let alone discipline, for their shortcomings on the basis of clout with the Communist Party's Central Committee. In like vein, he details the many ways in which the putatively omnipotent KGB was prone to err on its own and as the instrument of a corrupt, unprincipled government. Though increasingly disaffected, Kuzichkin soldiered on until realizing he had been set up to take a fall for some purloined documents. He crossed the Turkish border and sought asylum in the UK in mid-1982. At this remove, Kuzichkin offers an insider's enlightening perspectives on the convulsive events that marked his five-year sojourn in Iran. Cases in point range from the establishment of an Islamic republic through seizure of the US embassy, the execution of Sadegh Ghotbzadeh, the Kremlin's decision to invade Afghanistan, and the onset of the Iran-Iraq war. The author also includes an afterword that not only pays graceful tribute to Western democratic values but also excoriates the Gorbachev regime's unavailing responses to civil disturbances unleashed by glasnost and perestroika. Thought-provoking testimony from an erstwhile cold warrior who's not marching anymore.