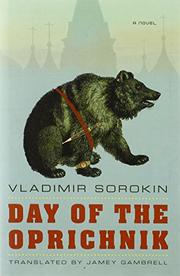 DAY OF THE OPRICHNIK

In the near future, a member of a government-sponsored goon squad bears witness to the skewed and skewered state of Mother Russia.

Perhaps no other postmodern writer demonstrates the angst around the reemergence of Russia’s slide back toward authoritarianism than the celebrated (and often reviled) satirist Sorokin (Ice, 2007, etc). His latest assault, not only on Putin’s government but literary senses, is a caustic, slash-and-burn portrait of a man joyfully engaged in the business of state-initiated terrorism. Our narrator is Andrei Danilovich Komiaga, a gleefully enthusiastic member of the Oprichniki. Originally formed by Ivan the Terrible to torture and murder enemies of the Tsar, the Oprichniks are resurrected in 2028 for much the same reason. Andrei is close to Tsar Nikolai Platonovich, who rules with an equally iron fist. The new Tsar laid the foundation of the Western Wall 16 years earlier, fencing the country off from all foreign influence, as its citizens burned their passports in Red Square. There are wildly hallucinogenic elements to Sorokin’s odd future—genetically modified fish are used as recreational drugs, while the tightly controlled news is delivered straight to the brain. But it all exists to add pitch to the author’s frenzied, dystopian satire. His hero is a piece of work—patriotic to a fault and enraptured by his duty. “This work is—passionate, and absolutely necessary,” Andrei tells us. “It gives us more strength to overcome the enemies of the Russian state. Even this succulent work requires a certain seriousness. You have to start and finish by seniority. So this time, I’m first.” This chillingly lucid monologue is delivered as the fervent Oprichnik prepares to rape the widow of an already murdered dissident. It’s disturbing stuff, but as Sorokin’s razor-sharp caricature unfolds, bouncing from cocktail parties to assassinations to team-building orgies, the novelist’s keen argument becomes hard to ignore.

Acidly funny send-up of Russia’s current state of affairs that challenges the status quo with embellished wit and outlandish violence.