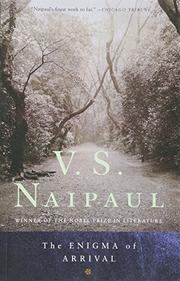 THE ENIGMA OF ARRIVAL

A book utterly unlike recent Naipaul: called a novel but in more ways an autobiography—and in more ways than that a brilliant tracing of a writer's (or of one as candid and un-self-consoling as is Naipaul) journey from opinion into knowledge and then into the ethical sovereignty of language. Set over a 20-year span in which the narrator at various times in his writer's career had lived in a cottage on the grounds of a crumbling Salisbury, England, manor estate, the book is a portrait of the landscape and the people of the manor as well as of the growing security of subject matter that becomes the writer's achievement during that time. Among those portrayed are two gardners, Jack and Pitton (very different men in their way); the resident manager, Phillips; the local cabdriver Bray; and the shadowy landlord (who sends copies of his own poems for the writer to read, poems about Shiva and Krishna). But never is there condescension. If the writer is disgusted with anyone at Salisbury it is with himself, for his presumptions: the manor and its denizens act as a scrim for his idea first of decay; and then of decay modulating into flux, change; and then of change into death—a revelation of artistic freedom that the writer/Naipaul finds is his empowerment to write so different a book as this. Dense, often slow, it's a book of enormous subtle accretion but also of stripping away of self-pretense. It also offers a different, deeper sense of Naipaul's sensibility than has been seen: plugged as it is into cycles of ruin that are poetic, viscerally sad, yet ultimately beautiful, Naipaul's precious discomfort—that of the dis-cultured—has never seemed more palpable and moving. A difficult book in many ways, without flash or titillation—but maybe Naipaul's best work since In a Free State (1971) and unique among literary memoirs.