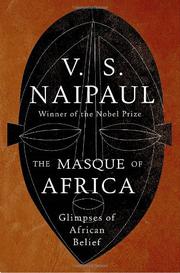 THE MASQUE OF AFRICA

In this minor but engaging work, the Nobel Prize winner (Magic Seeds, 2004, etc.) examines the supernatural and religious beliefs he discovered in six African nations.

Beginning in 2008 in Uganda (where he was a visiting professor in 1966), the author was stunned by the burgeoning population. Throughout his African journeys, he observed the lingering effects of foreign religions—Christianity, Islam and others—and the almost universal adherence of most people, even the highly educated, to beliefs and traditions that thrum with the energy of the forest, magic, mischief and witchcraft. He repeatedly comments sorrowfully about the abuse of animals he saw everywhere—from traditional domestic pets to larger animals used in ritual sacrifices to big-game creatures that have no chance in the brave new world of GPS and high-powered rifles. In Uganda, he wondered if the lack of written history has given strength to the oral tradition, to legend and myth, and he visited a witchdoctor, which was surprisingly expensive. In Nigeria, he reflects on the writings of Scottish explorer Mungo Park, on the origins of “mumbo jumbo” and on the enduring cultural significance of soothsayers. He received permission to visit a breathtaking sacred grove. In Ghana, he learned about polytheism and heard how people dine on dogs and cats. In Ivory Coast, he saw a castle whose fetid moat was home to (imported) crocodiles and a surprisingly impressive cathedral. In Gabon he witnessed initiation rites, though he saw only what the participants permitted. He heard about wizards, witches and astral journeys, and he made a stop at the former home of Albert Schweitzer, now not so impressive. He ends in South Africa, where “race ran as deep as religion elsewhere.”