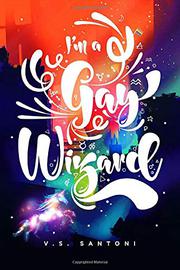 A (presumably Latinx) gay teen is forcibly taken to a school for teen wizards.

Juan “Johnny” Diaz and his best friend, a transgender girl named Alison, think they’re just playing around when they cast a magic spell, but they are abducted to a secretive institute for teens exhibiting magical potential. At this facility, however, they are told that using magic is forbidden both on and off campus, so it’s unclear how they are expected to be trained, and it seems its true purpose is to suppress magical powers, or maybe to conduct nefarious research, or perhaps to do some other dastardly thing to the teens—who alternately want to get the hell out and want to stay put, especially Johnny, who finds an instant friend-turned-boyfriend in Hunter (who rapidly goes from thinking he’s straight to understanding he’s gay—and then equally rapidly from wanting to keep that information to himself to wanting to shout it from the rooftops). Johnny and friends venture into the Everywhen, a place all humans enter when they sleep, and encounter monsters. The pacing can best be described as hurry-up-and-wait, and the characters’ motivations and needs change by the page. Magical beings seem to be drawn from myriad mythological and literary sources, which would be interesting if they weren’t so briefly visited and quickly dropped in favor of the next plot twist.

The entertaining title is the best part of this disaster.