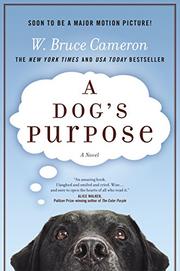 A Novel for Humans

From humor columnist Cameron (8 Simple Rules for Dating my Teenage Daughter, 2008, etc.), a first novel that follows the spiritual journey of a dog through four incarnations.

“Toby” is first born in a litter of four to a mother who lives in the wild away from humans. But soon the family is captured. Although his mother wants only to escape, Toby—who understands human language as soon as he hears it—is immediately drawn to the human kindness of the woman who has made it her mission to care for strays. Unfortunately her facility is already overcrowded when a vicious new dog arrives. Injured in a fight among the dogs, Toby ends up in a pound where he is put down, but not before he’s begun to wonder what his purpose in life might be. He is reborn as “Bailey,” a golden retriever who becomes the beloved pet of “the boy” named Ethan. Ethan lives with his parents in town but spends summers on his grandparents’ farm, where both Ethan and Bailey form a special bond with a little girl named Hannah. When Ethan is a teenager, a jealous, frankly evil schoolmate burns down Ethan’s house. Bailey helps the police catch the perpetrator, but Ethan is badly injured, physically and emotionally. He and Bailey spend his senior year recuperating at his grandparents’ farm as his parents’ marriage disintegrates. By now Bailey has realized that his purpose is to comfort Ethan. Ethan goes off to college and eventually Bailey dies of old age to be reborn as Ellie, a female dog who becomes the star of a K-9 unit until she loses her sense of smell. Although her owners love her, she never forgets her special bond with Ethan. So when Toby/Bailey/Ellie is reborn, male again, he searches until he finds Ethan, now a lonely old man living on the family farm. Soon Ethan adopts “Buddy,” who reunites Ethan with his lost love Hannah.

Marley and Me combined with Tuesdays with Morrie.