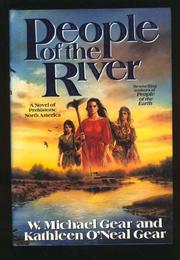 PEOPLE OF THE RIVER

An earnest tale of warfare and spiritual journeys among an ancient American people—the first of this archaeologist team's First North Americans series to appear in hardcover. The story takes place circa A.D. 1300, in what is now Illinois, and concerns a vanished people known as the Mound Builders. The city of Cahokia—a trading and governing center—has as its leader the Great Chief Theron, who, at a time of growing drought and scarcity, insists on sacking his group of villages. Leading Theron's forces is a Brutus sort of warrior, Badgertail, who hates making war on brothers but believes instead in preserving order. And a rebellion is growing. Meanwhile, it's obvious to the priestess Nightshade—once captured as a child by Theron's father, escaped, and recaptured—that the First Woman (a supernatural deity) has closed off her realm and can't be reached for relief from war and famine. The child Lichen, however, tutored to shed self and give up her soul, will eventually pass through the Well of the Ancestors to the Underworld and confront the First Woman—who declares that ``Mother Earth would be better off without people...Part of my soul died with the last mammoth calf.'' At the close, Theron is killed, and the good survivors find a kind of paradise. At first a bit thick and hard to follow, and there's the inevitable jolly anachronism (Lichen's mom: ``I'm giving you ten days. You should be able to teach her the basic skills of Dreaming in that time'')—but the warfare is strikingly graphic, the Dreaming excursions intense. With the supernatural elements and harsh utilitarian characters, this has a remote but sturdy science- fiction feel rather than the nutty swashbuckling intimacy of Auel's novels.