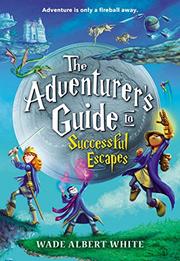 THE ADVENTURER'S GUIDE TO SUCCESSFUL ESCAPES

From the Adventurer's Guide series, volume 1

Enter a world of magick, quests, and dragons with fireball powers in White’s debut.

Under the Matron’s thumb, Anne and her best friend, Penelope, spend most of their time toiling away at St. Lupin’s Institute for Perpetually Wicked and Hideously Unattractive Children and counting down the days until they can leave. Unfortunately, as an orphan with “no proof of origin,” Anne has very few prospects. But that all changes when she and Penelope are invited to join a local quest academy and Anne stumbles into a high-level Rightful Heir quest. The stakes are high, and with minimal quest training and only three days and 14 1/2 hours, Anne, Penelope, and their new quest member, Hiro, must outsmart the meddling Wizards’ Council, crack indecipherable riddles, and extricate themselves from odd scenarios. Featuring a colorful and diverse cast of characters (including the academy’s cat headmistress) and sometimes ridiculous yet nail-biting action, this is a highly distinctive, smart take on the fantasy novel. All the tropes are there, but White unabashedly calls attention to them, adding to the hilarity. Delightfully, Anne has dark brown skin, while sidekick Penelope is white.

In this series opener, readers will find a humorous tale of adventure, friendship, and courage, all led by a brown-skinned protagonist.