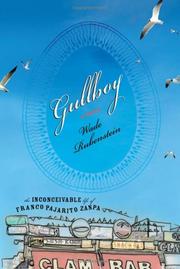 A breezy, colloquial first novel set near Coney Island, Brooklyn, chronicling the lively short life of a half-boy, half-seagull foundling and the motley assortment of characters who love and exploit him.

Ernesto Zanpa feels pressured to marry his gorgeous, venal streetwalking girlfriend, Venus, and bring her to live in his inherited bungalow in Brooklyn. Ernesto, who has little inclination to work, is waiting for his pay-out from a trumped-up accident case being handled by ambulance-chasing lawyer Irv Schagrin, who has some messy, increasingly perilous ties with the Russian Mafia of Brighton Beach. One night, Ernesto finds a baby “gullboy,” covered with “delicate, white down” and with arms like wings, and takes him in, to Venus’s chagrin; the gullboy reminds Ernesto of his deceased father and Ernesto names him Franco, or Franny, resisting doctors’ advice to permit a surgery that would make Franco look more like other boys. Franco grows in a few months’ time, along with Venus’s ambition, as she expands her sex business to Fifth Avenue with the financial help of Irv, who plots with her to gullnap Franco and exploit him at a freak show. Meanwhile, proud, devoted father Ernesto at last finds his calling as a cook at Manny’s Restaurant, on Brighton Beach Avenue, then in a restaurant of his own, Big E’s Gangsta Grill. Franco, meanwhile, enters a rocky adolescence. Tertiary characters include Irv’s former secretary Tatiana Minkova, who becomes a magician’s assistant then waitress, pursued by the meaty partner in a major accounting firm, Larry Rubbers, whose heart gives out while jogging on the boardwalk.

A great-hearted, nostalgic celebration of the Brooklyn mish-mash and a mildly riotous commentary on the father-son relationship.