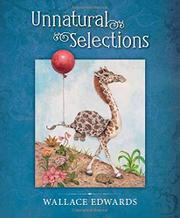 A gallery of chimerical critters that Darwin himself would be hard put to justify.

Edwards catches the exuberant “Whalephant” in midbreach, water streaming from its flapping ears as well as its flukes and a broad grin behind its trunk and tusks. He places the sinuous “Cowaconda” (“when her head is near, her body’s yond-a”) in a verdant meadow alongside a Koalarus, a Dorse and a Swox (as well as a fully ordinary Holstein that stands under a tree in whose branches an anaconda twines). The Tyrabbosaurus Rex sits on a stool, waiting for his meal (“He loves when his tasty carrots / are delivered by friendly parrots”), its toothy, reptilian head bedecked with long white ears sitting atop a fuzzy white body. With these and other lovingly detailed portmanteau creations, Edwards (Mixed Beasts, 2005) takes nature past its outer limits to hilarious effect. Made up of easily recognizable, if notably unlikely, parts that are rendered with crisp, colorful precision, each of the 12 animals poses proudly in (more or less) natural settings. The odd, smaller Frogtopus or Snailagator hides in the weeds for sharper-eyed viewers to spot. The comment attached to the seven-animal Skip serves for all: “A wondrous beast / to say the least.”

An imaginary zoo that will set readers to chortling.