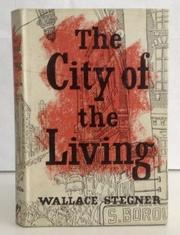 THE CITY OF THE LIVING

A sheaf of short stories, eight in all, are undercut by the realities of poverty, death, and acceptance of the immutable facts which only experience can teach, a moment of sudden recognition. With the exception of the sardonic Field Guide is the Western Birds, in which a retired literary agent applies his agile powers of observation to his neighbors- collected at a cocktail party- in a curd commentary, the others are more straightforward in their unpleasant truths. A hatred of his father is dimmed by pity- but does not bind him to his cheap life of the poolroom; a welfare worker tries to help a pachuco "alley cat" but knows that even if reclamation is hopeless, the chance must be offered; a man returns a stranger, after 25 years, to his aunt's funeral to watch the undertaker complete her transformation from something "terrible and lost" to something "removed and bearable"; in the title story, a father who has seen the efficacy of drugs which have saved his boy's life in a filthy Egyptian city is given pause when he witnesses an older form of help and healing- a praying native....Stegner makes an efficient- if not outstanding- use of this medium- seldom one to attract the full strength public of the full length book.