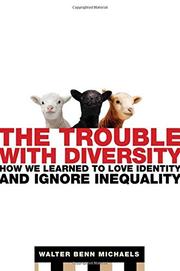 THE TROUBLE WITH DIVERSITY

How We Learned to Love Identity and Ignore Inequality
by Walter Benn Michaels
BUY NOW FROM
AMAZON
BARNES & NOBLE
GET WEEKLY BOOK RECOMMENDATIONS:

A radical critique of the nation’s penchant for highlighting diversity and ignoring financial inequality.

Michaels (English/Univ. of Illinois, Chicago; The Shape of the Signifier, 2004) says Americans would rather talk about racial, ethnic and gender differences than focus on the only difference that matters—some people are rich (and getting richer) and the rest are not. For years, as the gap between the rich and the poor has widened, “we’ve been urged to respect people’s identities—as if the problem of poverty would be solved if we just appreciated the poor,” he writes. In fact, the poor are not interested in diversity; they want to stop being poor, he says, noting there will never be a National Museum of Lower-Income Americans on the DC Mall. Drawing examples from current events, novels and popular culture, Michaels describes a national near-fetish with cultural diversity that manifests itself in everything from university enrollments to corporate hiring. Used to organizing the world racially, Americans keep doing it, finding it easier to fight racism rather than admit to class differences. The author excoriates both left and right, arguing that diversity satisfies both sides in the culture wars, permitting them to believe that “the fundamental problems of American society have nothing to do with capitalism.” His challenge to the nation’s dominant thinking can be unsettling, and he will provoke many with assertions minimizing the impact of discrimination in American life: He says, for example, that black intellectuals are simply nostalgic for the black culture that Jim Crow helped create, and that anti-Semitism has never been as significant as Negrophobia. By basking constantly in identity, Americans are able to avoid seeing and acting on class inequalities. Thus, says the author, some critics mistakenly chose to see President Bush as anti-black—not anti-poor—in his handling of Hurricane Katrina, when in fact not many rich black people were left behind in New Orleans.

Identity is bunk. What’s in your wallet?

WE GON' BE ALRIGHT
by Jeff Chang
Newsletter sign-up